-To cancel your activity and credit invoice within 14 days from order,
log on to your member account and cancel under "my activities"
or reply to relevant confirmation or invoice e-mail.
-To cancel renewal of membership please contact us - here
-Upon recieval of invoice you have 30 days payment period
after which you will receive reminder invoice and eventually might loose your membership status.

Invoice payment
can be made by international bank payment, BG (Sweden only)
and online by VISA and Mastercard.
Online payments are available:
-at end of any online activity registration process
-in arrears for any membership and activity invoices:
log on to your member account and pay online under "my invoices".

Handling of personal data (Personal Data Act)
To handle your participation, membership and for communication and accounting purposes we will store your personal data as name contact data and membership history in a safe way according to the Personal Data Act and according to accounting law.
Should you wish to decline future information, please contact us.

The general assembly (GA) 2023 will be a half day online event on May 25th, combining the GA with two or three scientific talks.

We hope you will joint the GA! More information is coming.

The minutes will soon be found here.

SASP organizes and serves as a networking arena for pain researchers across the Nordic countries. The main task of SASP is to bring these groups and resources together, facilitate new research collaborations and generate new ideas. 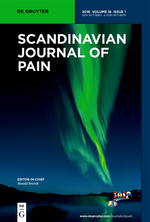